Intel Z590 vs Z490 Motherboards: Which Should You Buy?

The 11th Generation Rocket Lake processors have a companion chipset, and that’s the Intel Z590 motherboard. It is a premium offering from Intel that deserves a close look, especially if you have an older Z490 and are considering an upgrade. Or perhaps you want to choose between the two and you aren’t sure what the differences are. We have you covered with this in-depth look at how the two stack up to one other. So read our exclusive Intel Z590 vs Z490 Motherboards comparison below…

Differences between Z590 and Z490 Motherboards

The 11 Generation of Rocket Lake processors from Intel offer support for PCIe 4.0, which gives you quicker processing speeds when using PCIe 4.0 SSDs. The 10th Gen CPUs provided no support for PCIe 4.0, which is why Intel simply made sure that the Z490 motherboard would provide that support for all further 11th Generation processors. Not all of the board manufacturing partners will have that support, though, and we advise you to stick with the Z590 if you are going to use an 11th Generation CPU.

There are some new connectivity features with the new Z590 chipset that you ought to know about. The transfer rate maxes out at 20 Gbps because of the native support for USB 3.2 using a Gen 2×2 port. You will find that a portion of the companies that manufacture Z490 boards included that port in their products, utilizing an ASMedia chip that linked into the PCIe lanes on the motherboard directly.

There was another improvement to this iteration of the motherboard in the Maple Ridge Thunderbolt 4 controller. The transfer rate is staying the same, but there are added features like boosted security, extra length cable support, 8K display support, and tree chaining. These all add up to a more powerful, high value package. It also includes boosted integrated graphics that can be found in all of the 11th Gen CPUs.

DMI connectivity (more details here) has experienced a boost as well with eight lanes over the previous four in this new Z590 chipset. That means more bandwidth for you and support for two M.2 SSDs, even when the system is operating at top speed. There are 8x PCIe 3.0 lanes as well, but you only get these features if you are using an 11th Gen processor. The 10th Gen processors will simply switch automatically over to x4 lanes.

You also got support for DDR4-3200 maximum frequency with the Z590. Compare that to the Z490’s DDR4-2933 and you will see the improvement. In theory, you should be able to find motherboards that support a maximum of DDR4-5333, but those can be really expensive. If you are overclocking, you can void your warranty. For those who want quicker RAM, the Z590 is the ideal option.

Who is the Intel Z590 chipset for?

The 11th Gen Rocket Lake processors are a very good fit for the Intel Z590 chipset. You get some great new features like updated data transfer standards, PCLe.40 compatibility, and high-speed RAM. If you want to get more out of your hardware, then this is what you need. If you have a Z490 already and want to improve your specs, then you will probably want to try it on a Rocket Lake CPU before making the change over to Z590. Just check to see how the older motherboard functions before making your decision and see if you are really in need of an upgrade.

Why you should buy a Z590 motherboard 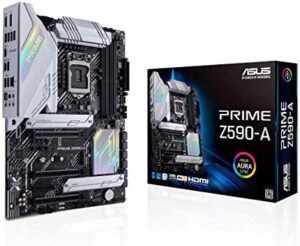 The Z590 gives you a greater bandwidth because it is doubling how many lanes you get when you do a DMI link between the processor and the motherboard. That means that manufacturers can have a way to add in extra storage slots and more devices, giving you improved network and storage capabilities and more. If the manufacturer includes both possible M.2 slots, then they are really using the chipset to its full capabilities and can add wo more slots that operate at PCIe 3.0 x4 speed.

If you are getting an 11th Gen CPU and it includes PCIe 4.0, then you should make sure you have a motherboard and chipset with the proper support for that. You will find that every Z590 motherboard offers that support, but some of the Z490 motherboards do not. ASUS is one of the biggest offenders there in that regard.

With PCIe 4.0, you get a stronger performance and the option for expansion in your storage, network, and peripherals.

All of the latest and greatest peripherals are included in the new Z590 motherboard, including USB 3.2 Gen 2×2. This will let you use Thunderbolt 4 and speeds of up to 20 Gbps. If you think you might be able to use those and the extra ports, then it makes sense to get the Z590.

We recommend using the Z590 motherboard with the following CPUs:

Who is the Intel Z490 chipset for?

If you want to use an Intel 10th Gen processor, then the Z490 is the way to go. Some of the chipsets do not have any PCIe 4.0 support, and there are limited connectivity options, and it’s a slower motherboard in comparison to the Z590. This is why the Z490 is not a good pairing with Rocket Lake CPU’s, though those CPU’s will support this motherboard.

Why you should buy a Z490 motherboard

There will likely be some price cuts for the Z490, since it is an older chipset. It does come with premium features, including its high-quality power delivery system and great VRM’s, so there’s no need to pay for the more expensive Z590 motherboard just to get those features.

A better option for regular users

For the average computer user, you probably don’t need all the souped-up specs that the Z590 offers. Even if you have a Rocket Lake i3 or i5 processor, the Z490 is the more affordable option and will still work fine with your processor. You’ll be saving a lot of money and can use the extra money to upgrade your GPU or SSD.

Intel 10th Gen CPUs do not benefit from Z590

There’s no support for PCIe 4.0 (click here for more info) with 10th Generation Intel Core processors. They also have reduced bandwidth speed compared to the newer chipset, and that is going to mean a drop in functionality when contrasted against the Z590 motherboard. There is no need to get a Z590 motherboard unless you are wanting a higher end 10th Generation processor (the Core i9-10900K, for example) and you want to do some overclocking with it by using high speed RAM.

Which CPUs work best with the Z490 motherboards? Try these:

There is definitely a generational gap between the Z490 and Z590 chipsets, which our Intel Z590 vs Z490 Motherboards review has found. It’s not much of a gap, but each of these has its advantages and disadvantages. If you are trying to upgrade your 10th generation Intel processor, the Z490 is the better option. You can always test out your processor and see how it works with the Z490 before trying to upgrade to the Z590.

If you have a 10th Gen processor already and are using something like the i9-10900K, then the Z590 will give you improved memory support and will adequately futureproof your setup.

For those who just want to do lighter, more casual work on their PC and who aren’t in need of improved connectivity or speedier peripherals, Z490 is probably the best way to go. It may not offer PCIe 4.0 support, but it is much cheaper and works perfectly fine with the i3 and i5 options. Ultimately, it’s up to you and what you want to spend and what you feel good with. We hope our Intel Z590 vs Z490 Motherboards article has been helpful!

You way wish to check out our article on the Z690 for added content.