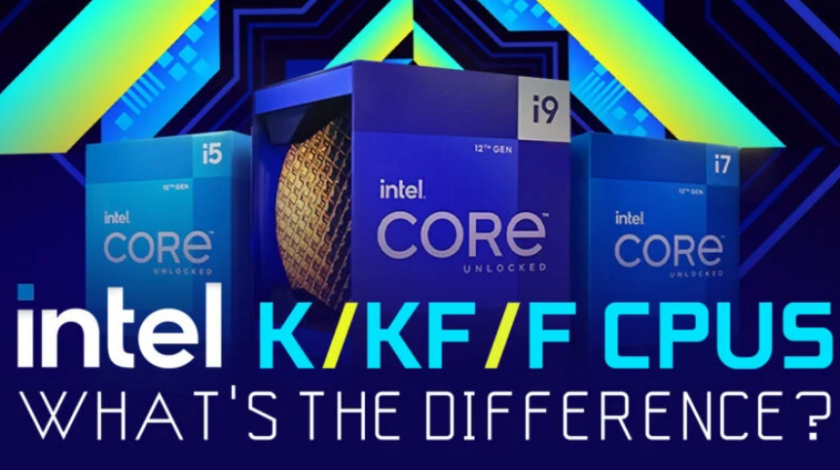 Intel K vs KF vs F: What’s the Difference?

Once you are in the market for an Intel processor, you will come across options with letters like F, KF, and K. These were not part of the processor options in the past, so you might be confused by what they mean. Let’s look at the Intel F, K, and KF processors and examine the differences so you can stay informed.

Differences Between the K, KF, and F Intel Processors

If your Intel processor has a K, that means that it is able to be overclocked and has been unlocked. F means that there is no iGPU or integrated graphics for the processor. KF series processors tend to be cheaper than K processors and usually have no iGPU. KF and K chips are comparable, however, when it comes to performance, clock speed, and number of cores.

You won’t find any integrated graphics with the F series processors, so that means they will not be as expensive as the non-K processors. However, they have the same performance as the non-K ones due to their locked multiplier. Some KS processors are better performers and are higher binned k processors that are classified as Special Editions. These tend to cost more but also have a higher base clock speed.

Let’s talk about Intel’s K processors to start off. Like we said, the K denotes that the chip has been unlocked and will permit overclocking. That means you can get more performance out of it and push it harder. You will need to utilize a motherboard that has been designed for that purpose, though, like one with a liquid cooling system. That’s because overclocking really taxes your system and can burn it out due to the high temperatures it creates.

If you are going to be overclocking your processor, then you need to know what your computer’s BIOS settings are, says WikiHow. People who buy the K processor tend to be those who are trying to squeeze as much as they can out of their computers. If you are not interested in overclocking your computer, then you probably do not even need a K processor, especially since they tend to be pricier than the other processor types.

The KF processors are practically the same as the K processors but do not have integrated graphics. This makes them cheaper and also means that you will need a dedicated graphics card to work with it. For video output, your monitor needs some kind of graphics processor.

If you are trying to use the KF processor by itself, you may have some issues with performance and output, but if you pair it with a graphics card or you want to simply create content, it is a pretty good option.

Your desktop can consume a lot of power if you scrape the iGPU, which causes the graphics to run discreetly on a continuous basis. That puts extra stress on your graphics card by creating higher temperatures, shortening its lifespan. You will not be able to use certain features (like QuickSync, for example) that needs an iGPU to function.

With the F series, you have a multiplier locked KF processor that has no iGPU. These have to be linked to a dedicated GPU to function at all. Despite the locked multiplier, you can still set all the cores of a high frequency and get a performance boost by adjusting the BCLK settings.

You have to know your stuff, though, in order to do that, as it can be pretty complex. If you make a mistake, you could end up corrupting your system. While the F processors have a lower base clock compared to the KF series, they have the same boost clocks.

What is an Intel KS processor? This is a higher binned CPU that can go further than the K series processors of similar spec of class, according to Engadget. Some CPUs will not perform at the same level consistently due to the way CPU production works.

An example of that would be a 12900K CPU that performs better and has a better base clock speed than some other 12900K CPU. The higher performing one would be classified as KS, meaning that it is a step up from an Intel K processor.

There are other options as well that you may come across. The Non-K Core processors have no overclocking feature but do include integrated GPUs. That sets them apart from the F series processors. Non-K processors can handle lighter performance workloads and are not designed with a dedicated graphics card.

The Core X desktop processors are another option. They are incredibly good at overclocking and have superb performance, but they are also pricey. They are ideal for people who are looking for a powerful performance from their machine and who want the best overall experience, regardless of price.

Intel K vs KF for Gaming 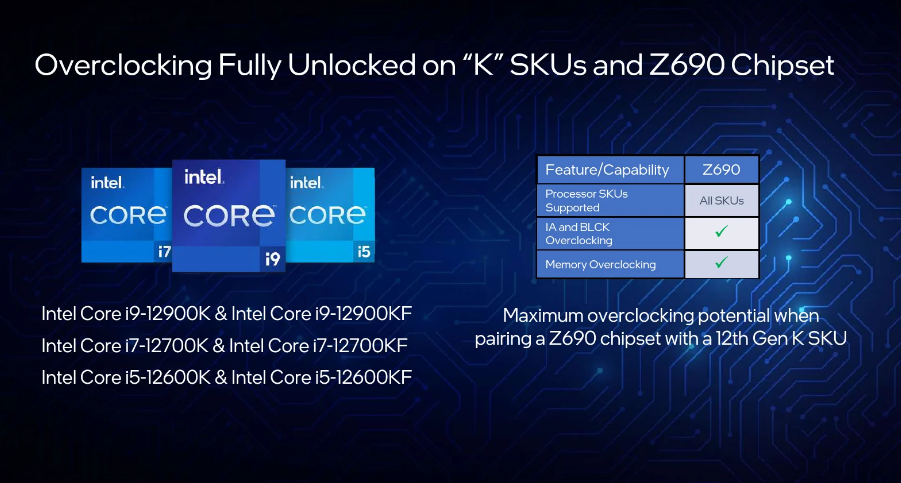 Maybe you are not sure whether you want a KF or K CPU with your Z690 motherboard. If so, you should know that that KF CPU will not cost as much as the K CPU. Both of these share identical clock speed, core count, and other specs, but the KF CPU includes no graphics card. Just pair a graphics card with your Intel KF CPU, and you can expect the same performance as if you were using an Intel K CPU.

You might think the integrated graphics that the Intel K CPU has is a bit redundant, but if you GPU expires, the integrated graphics card will be handy. When your GPU dies and you have a KF CPU, you will have no way to use you PC until you get a new GPU to work with it. A K CPU costs more but gives you peace of mind, whereas the KF CPU is cheaper and will handle most computational and gaming needs just fine.

Make sure you know what you need out of an Intel processor. Know the differences and how they will affect you, and consider how much you can afford to pay and the value of the processor in the long run. The F series is perfect for people who need a cheap processor and who are just doing basic computer tasks without much concern for creating a gaming rig. The low costs and decent performance make the F series the obvious choice for those kinds of people. They have an integrated GPU, and the i5 variant boasts an even better performance, while the i3 version is more budget friendly.

For those heavier computer workloads and for serious gaming, try the KF or K series of Intel processors. The best ones are the i5-i7 options. These offer a discrete GPU and good performance, plus you get a processor that can handle overclocking.

The K family i9 is an excellent one as well if you are looking to improve upon the performance provided by the i7. The price of the i9 and 97 are nearly identical, and the iGPU (definition here) gives you some extra functionality. Just be sure you pair it with a good graphics card to get the most out of it.

For the PC enthusiast, the Intel X series is top notch. It offers excellent overclocking functionality and premium cores. It outperforms all other Intel CPUs and is the clear option for the dedicated techie.

2023-01-23
Previous Post: Intel Z590 vs Z490 Motherboards: Which Should You Buy?
Next Post: Why Upgrading to the Latest Smartphone Models is Important: A Guide to Staying Ahead of the Technology Curve